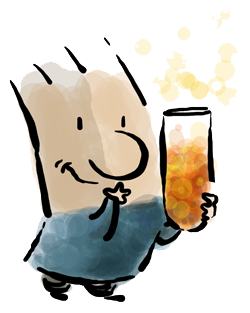 Imagine you're asked to go to the post office.

You have to go down the stairs, take a left, then a right, walk 500 metres, then turn left, find the blue building and then look for the green post box. That's when you know you've reached the post office. The only problem we have with this scenario is that many of us may take the right instead of the left, and wonder if the post box was green or blue. Oh, and yes, what is 500 metres anyway? There are three lanes. Was the lane you missed, the 500 metre mark?

Or is it the next lane?

Any learning has complexity far more than we expect

In the headlines course at Psychotactics, for instance, we ask the participants to introduce themselves on the first day. How hard is that? Not very, is it? The next day they have to list ten things in the room. The day after, list ten things outside the room.

See where this is going?

You probably don't, but the goal is to create a safe zone. A zone where you can get nothing wrong. In the first example, you could get the left/right/500 metres/blue/green wrong. In the second example there's no chance of getting anything wrong.

You see if you/or your client takes seven steps, there's a good chance that every one of those seven steps are wrong. Or right. But even if they are right, those steps could be an utter fluke.

You don't want fluke when teaching/learning. You want certainty. So when you provide a client with a single step, there are only three options.

3) They will do it differently.

So if we were to take the trip to the post office, it would need to be broken down like this

As you can see, every part of the deconstruction process has in built check mechanism. Because even when a task is really simple, people can do things wrong or differently.

Let me give you an example

In the “First 50 Words” course, the first day's assignment was a round of introductions, then the second day was to find synonyms for three words. The instructions were clear. First you think up as many synonyms as you possibly can. Then reach for the thesaurus.

Guess what at least 30% did with such simple instructions?

They missed out the second part. They didn't reach for the thesaurus. This meant that they now spent an hour or more on an exercise that should have taken no more than 20-30 minutes at best. This meant that they thought it was 200%-300% harder, more time-consuming and felt too drained to get the benefit of seeing what others in their group had achieved.

Now imagine giving them six steps to do, instead. Almost everyone would miss some of the instructions, and you'd have chaos instead.

Even the most basic photography course compels the teacher to cover three core elements.

Are you confused yet? You should be, because even if you know what those three things stand for, the teacher will try and get all three across to you, mix in some F stop terminology, focal length blah, blah and you're standing there like a stunned mullet. And so you have to ask yourself: How do I make this really, really simple? And the only answer to that question is: start with one step.

When you start with one step e.g. ISO, you'll find something interesting

People don't know a heck of a lot about it. In fact, some people don't know where to find their ISO buttons. They also don't change ISO when they go from light to dark situations. In short, to really deconstruct, the teacher needs to work on ONE thing and drill down until that one thing has become second nature and most of the mistakes have been weeded out.

A simple ISO setting that would put most of us photographers to sleep, becomes a journey of exploration for a newbie. And that's what's deconstruction is really about.

It's about ONE step

And the only way you can understand how to deconstruct, is to take someone through the sequence. Take a newbie through the post office walk. Where do they stop? Where do they get confused? How do you then fix the instructions so they are able to make the right decisions?

If you have a group, get them all to do the task individually, and then watch what they're doing (In our courses, we're able to watch while they're doing their assignments on the forum). And then you pay attention to the glitches and slow things down to a crawl.

But isn't a crawl boring?

At first, sure it is. But once your students know that they can't go wrong. Once they know that your book/video/audio is so precise that they will get to the end smarter than before, they become very eager students. Now it's not a crawl.

Now it's that tiny bit that they have to do and then it's “recess time and they can play”.

Contrary to what we think, students/learners don't like hard work. They do get into a course wanting to learn everything, but tiredness and life soon sets in.

What keeps them motivated is the ability of the trainer/author to give them small bites. So small that they can't go wrong.

Something as simple as that.

So the next time you're creating your info-products or courses, stop. Take the walk to the “post office” and you'll get a better feeling for what your client really wants and needs from you.

NEW!  Critical Website Components
A series of three books on how to create your “Home Page”, “About Us” and “Get Customers To Sign Up”.