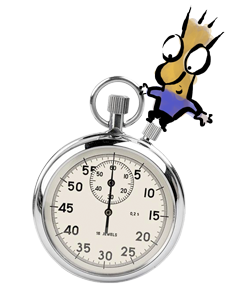 Do you know how you freeze when you see the tool bar on a program like Photoshop?

Do you know how you'd feel if you were thrown into a cockpit and asked to fly a plane?

Yes, you did know how you felt, the first time you were asked to drive a car.

It's your left brain at work

The left brain is the bully brain. It doesn't just complicate things with its logic, it goes one step further. It drowns out the free-thinking nature of the right brain. But first let's deal with logic.

The left brain is mathematical and logical

So like all maths problems it likes to be correct every time. Which is fine when you're dealing with maths and 7 + 3=10 (and can never be 11). Every thing has to be black and white.

It's different when you're drawing, or playing music or writing an article. You can have your black and whites and a range of rainbow colours. This of course drives your bully brain totally crazy. It's trying desperately to pigeon-hole what you do into black and white. And of course, it fails. This sends you into a bit of a spiral as you consider the options to rationally solve the problem.

This “crazy brain” activity applies to article writing, as well

Let's say you're writing outlines. And you logically want to think through the outlines. Well, that's going to take you about 15-20 minutes per outline and your bully brain ping pongs between black and white. But instead do something quite radical.

Cause the bully brain to shut down

The way to do this is to give yourself a fixed time. So you have to cover the entire outline in fewer than say, 5 minutes. Immediately your bully brain will snarl. Surely you can't have speed and quality, it hisses. But ignore it. Just go with your crazy brain. And at first, you'll get resistance, but eventually the bully, like all bullies, will just get fed up and leave.

I found this when I was teaching shorthand back in 1990

My dad used to own a secretarial college. And I'd just learned shorthand (which is a way of taking dictation really quickly, just using a bunch of squiggles). And I'd been deputed to dictate to a new batch of students. Well, I started the dictation slowly, but as the days passed, ramped it up to a rather quick speed.

My mother (who also taught at the college) was not impressed

She told me to slow down. She told me that the students would make mistakes. And yet, we found that the mistake rate had actually gone down when the students didn't have time to think. Their accuracy was up and their speed was better too.

But does that mean you should always go with the crazy brain?

No, of course not. Both brains have their value. But you have to recognise that the bully brain doesn't do very well when dealing with fuzzy stuff that doesn't end up with 7+3=10. So you have to bypass it. Sometimes speed works. Sometimes it doesn't.

Sometimes change of method, location, technology—there are different things that work. And your job is to find out how to stop your bully brain from taking centre stage and prancing around like a spoiled two-year old.

Find a way to access your crazy brain instead to tackle the same job in a totally different way. You get your work done and most importantly that bully brain shuts up.
Phew!

P.S. The brain loves a break

So no matter what you're doing, take a break, if only a small one. A few minutes makes a big difference. Don't head to Facebook. Just take a genuine break. Step outside for a few minutes. Or just lie on the floor and relax your back. And the brain functions a lot better.

About The Brain Audit
There are two very specific extra “weapons” that The Brain Audit gave me. Weapons that I never got from the many copy writing courses out there (and if you're like me, you've got them all, too).

The Brain Audit not only explains HOW the brain works, but also WHY it works. This is master-level applied psychology, necessary for any self-respecting marketer.

Gabor Wolf
Marketing Consultant— Budapest, Hungary
Judge for yourself—The Brain Audit is a complete system that enables you to understand what’s going on inside the brain of your customer.
(P.S. The Brain Audit has received over 800 testimonials)