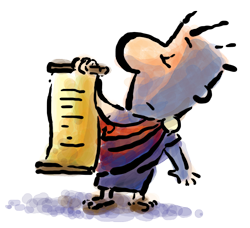 In Tokyo, under the Ginza railway station, there is a famous restaurant run by Jiro.

The spotlight is obviously on Jiro, because of his Michelin-star status.

Among all the restaurants in the world, few restaurants get the privilege of getting an extremely high rating in the food industry. And in this unassuming 10 seats restaurant, Jiro doesn't work alone. Instead there are a host of helpers that seem to be almost invisible.

Some of them simply chop the veggies.

Some of them take out the garbage.

Some of them make sure the rice is right.

Why would you go about cutting vegetables and moving sticky rice for years on end, with no perceptible reward in sight. Sure, you may well become a sushi chef, but it's a long ten year journey. So why bother? And at least until recently, a large part of the East didn't understand the West.

The West was obsessed with why.

Because WHY brings a sense of deadline

When you were really young, you never questioned why, did you?

Why did you learn to speak your native language?

Why not learn Cantonese instead?

A lot of our very early learning is not dominated by why. And with the East, just as in the West, the WHY does come up. Kids grow up to be curious and ask WHY.

If you ever watched the “Karate Kid”, a movie from the 80's, you'd have run into the central characters: Daniel (the kid from California) and Mr.Miyagi, an immigrant in the U.S.

Daniel wants to learn karate, but only because he gets beaten up so much.

He has a goal—a WHY.

And instead of taking him though the drills that the neighbourhood karate class employs, Mr. Miyagi makes Daniel sandpaper his deck and paint the walls.

Psychotactics courses seem to have this same bizarre system of getting clients across without necessarily explaining why.

WHY is a natural question, but not a particularly important one

When you ask WHY, it may well be to satisfy a curiosity. But often the WHY comes more from the urgency.

Why are we doing the course this way?

Why is the book built that way?

Why, Why and Why?

And even when the answer is satisfactory, the urgency remains.

But if you're a sushi chef, the goal is to learn from the teacher. The WHY slides a bit into oblivion.

The Renaissance in Italy, flourished because of the absence of WHY

Some of the most amazing work was created in the guilds of the Renaissance, a time when you simply followed your guild master and learned skills that would help you later. And while all this stuff about sushi-chefs, article-ninjas and Renaissance is important, it's also important to note that WHY does help.

Knowing WHY you're doing something gives the something a sense of purpose.

Does that help us achieve our goals?

Not necessarily. We step into a task with great vigour and then we lose our way, despite knowing WHY we're supposed to do something.

When people stand up and say that Apple creates amazing products, they attribute it to WHY.

But that's rarely the case.

Often Apple will create something that's so bizarrely useful (like the magnetic power cord) simply because a concept like that captures the imagination of the designer.

There are additional costs and resources required to design something brand new—and zero revenue. Your share prices don't go up. Your salary or status doesn't change. Apparently nothing changes, except there it is—an amazing magnetic power cord.

It helps us understand purpose. But it can be overrated. And we don't know WHY.

P.S. Instead of WHY, find the teacher.

P.P.S. Ten years ago, I wrote an article on ‘The Power of WHY'. That still stands. This is just the other side of the same coin.

“Do you want to raise your prices, get better clients, have more fun and remain authentic?”

“Pricing is an inexact science and Sean demonstrates how tightly value is related to price. In these books you will learn how to master the three gorillas of pricing.”

—Jeffrey Eisenberg, USA
Find out for yourself: Dartboard Pricing Strategy

Visual Basics: How Visuals Help Increase Sales Conversion On Your Website
Design Clarity: How to put sanity into your design with some really simple tweaks
Chaos Planning: How ‘Irregular' Folks Get Things Done

5000bc: The place to get reliable answers to your complex business problems?