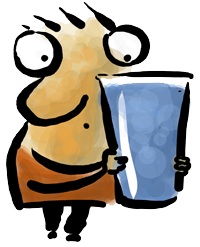 In every movie, there's the lead role and the supporting actor

Testimonials are seen mostly as third-party proof. So when you have a testimonial, it's not you saying how truly wonderful your product is, but instead having a customer say you're superfragilisticexpialidocious instead!

And amazing as it may sound, that third-party proof is the supporting role. The role your testimonial should play instead is to kill the objections instead.

When buying a product or service, the customer has objections

And most of the time, we hope the objections never come up. But of course they do, and then if we're prepared we squat away those objections with our logic.

But why not let the testimonials do that instead? Why not testimonials take the lead role in killing the objections?

So how do you go about getting testimonials that defuse objections?

Step 1: You determine the list of objections to buying your product or service. You'll tend to get about 6-7 main objections.

Step 2: You then find out which one of those 6-7 objections are the biggest. One of them will stand head and shoulders over the rest.

Step 3: You then get clients to give their testimonial based on that single objection.

Step 1: Let's say you're selling a coffee mug. And there are 6-7 objections.

Step 2: Let's then say that the biggest objection is “the mug is too expensive”.

Step 3: You get in touch with clients who've bought the mug. And then ask them to relate why the mug was still a good deal, despite being expensive.

When you do this exercise, you'll get a series of testimonials that deal with this one objection

You take four-five of these testimonials (maybe more) and plaster your webpage, your brochures etc. with the testimonials that deal with this one objection. e.g. It was too expensive but here's why I think it's a great deal. Yes, you figured it out.

The testimonial is playing a main role here. It's not just giving you the customer's “wow” but it's focused on destroying the objection with testimonial after testimonial that talks about just one objection.

But what do you do with the rest of the testimonials?

But you also have these other supporting objections and supporting testimonials. Well, go ahead and use them all, but make sure you get more testimonials that deal with the biggest objection, first. Then give the remaining space to the rest of the testimonials.

Lead roles makes for interesting movies. But supporting actors can't be ignored. They both play their part.

Just be sure to give the “lead actor” more lines to read and watch as your sales start to soar.

NEW!  Critical Website Components
A series of three books on how to create your “Home Page”, “About Us” and “Get Customers To Sign Up”.