We were promoting the Workshop in Los Angeles. As part of the marketing promotion, we put one little audio testimonial on the website. No, it doesn't matter what the testimonial said.

What matters, is that over 1200 people clicked on that one link to listen to the testimonial.

It wasn't the testimonial itself

I already told you so. It couldn't be the testimonial, because how on earth can you listen to a testimonial without first clicking on it? You can't, and we all know that. So why the heck did all those people click?

They want to know what's behing the ‘green door.' If you tantalise customers, and tease their brains just a little bit, you have a darned good chance of increasing your conversion rate, because hey, now they're going to click through and listen to another customer give a testimonial. 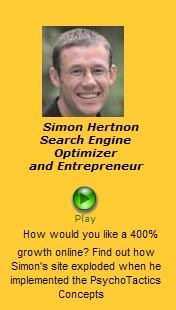 You can't listen to this testimonial. I know that. But you might still want to listen to it. There are several reasons.

1) The smile makes a difference. A testimonial with a smiling face gets more clicks over a non-smiler.

2) The caption is specific. It's related to online growth, not just any growth. If you're interested in growing ‘400%' online, then and only then, would you click on this testimonial. 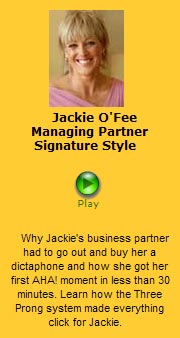 You can't listen to this testimonial. I know that. But you might still want to listen to it. There are several reasons.

3) Again, can we improve the caption? Sure we can. For example: What happened to Jackie 30 minutes into the Masterclass? Why was she ready to leave?

You'd want to know, wouldn't you?

1) Photo: Smiley is better than grumpy
2) Title/Profession: It matters. I'm looking in the mirror when I see a testimonial. If the testimonial isn't about ‘me', I'm gone.
3) Results: It always helps to have results in your captions.
4) Rewrite: There's no such thing as the best caption. I think both these captions need a rewrite. Note: I'm not rewriting the testimonial. I'm rewriting the caption.
5) Curiosity: Create high levels of curiosity. Ideally, put in at least one question in your caption. The brain wants to know the answer.

Hey, don't stop at audio testimonials
Written testimonials or video testimonials too need some whack. Take the lessons you've learned in this article, and rewrite, re-design, rewire your testimonials. Do the audit.