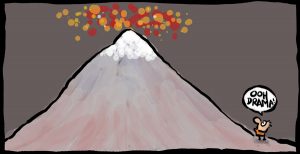 Five reasons?
There may be seven thousand reasons why your newsletter may not get a response. And the key lies in the word “response” itself. Most people don't have a darned clue what “response” means. When someone says, “I am getting no response”, do they mean:

Most of us simply want all of the above (and a bit more)
And that's a crappy way of measuring response. Partly because every article is designed to do something quite unique. Some articles may be written just to create a factor of branding.

So if you're a character like our friend Bill Gates, and you start writing articles on malaria instead of computer programs, then people get the idea that you're shifting your focus to some other venture. Or at least dabbling in some other venture or system.

You may not get a single response back, but the goal has been achieved. Now people who read newsletters from Bill Gates III are responding. You just can't “see” the response.

Knowing what you mean by response is the first problem.
And being able to put that response in the right context is also important. Because response could be just chatter. Some people may respond to you all day/month/year long and simply take up your time.

They may buy nothing, do nothing, and end up being a huge drain on your resources. But hey, you got your response, didn't you?

And there are times when you get zero response—not a peep—and members of the “lurker” audience buy everything you have to sell. So response is pretty unpredictable until it becomes quite predictable.

And the predictability must begin by ironing out the flaws in your newsletter. Here are five big reasons why newsletters don't get response.

I mean yeah, you have a workshop, you have some products, you have some whatever. And you know that just dumping the reader with what you're up to is a wasteful exercise. Yet most folks can't help themselves. They meant to be helpful.

They mean to write something useful, but they end up being self-promotional. Let's be honest: It's easier to say “Yoga class on Friday, 17th December” than it is to write an article on one aspect of yoga. And once you do sit down to write, you run into Problem No.2

2) The tone of writing may be cloudy, and not particularly exciting.
Tone is not everything, but it sure counts for a lot. Get a person to say something over the phone and they're all excited and vibrant. Get them to put down similar thoughts on paper and the clouds roll in. Every artist, singer, boxer and yes writer has a signature tone. This tone needs to be authentic.

You're not trying to play to the audience. You're just being yourself. You're writing like you speak. You're putting down on paper what you have in your head. And it's not like you haven't tried to create a tone before. You've tried and failed miserably.

But then you probably haven't tried tone over the phone. Yes, get a phone. Call a friend. And then get your friend to ask you questions on a specific topic you're familiar with. Then just blab away. And of course while you're speaking, be sure to record the call. And simply transcribe what you've said.

I know this method sounds tedious. But it's quicker than slaving over a boring newsletter that takes you two days to write, and is completely devoid of tone. Tone matters. You have it.

But tone alone won't save the day. Because structure counts as well.

3) The structure of the article may be like a bad day with a jigsaw puzzle.
Once upon a time there was a girl called Red Riding Hood. And this girl went into the forest. And blah dee, blah, blah, blah. So you probably know (or don't know) the story of Red Riding Hood. But it doesn't matter. What matters is that it's a story.

A story has a natural flow. It has a start, some drama, nice flow and an end. If your story doesn't have those elements, even a three-year old will look at you with scorn as you're telling the story. So great: Write a story. Maybe you can't write a newsletter that's nice and structured because you don't know how. But you can write a story, can't you? Just pick up client stories and write about what you've experienced.

And voilà, you have your structure. Now there are many ways to write an article, but why do you care? You want response, right? Well nothing brings out the colour and drama like a story does.

It's just pure drama from start to finish. And pray, how do you finish? Tell the moral of the story—just like you would in a real story. Seems lame to you to write something so basic? It's not basic at all. As humans we're entranced by stories. If you can create structure with a serious article, then do so. But if you can't, then use the story.

Mistake No. 5: Without a specific frequency, you're dead!
Switch on your TV at 6pm. What do you see? In most countries, it's the evening news. And every evening it's the same old news, but hey it's consistent. Most newsletters aren't. If you're going to write a newsletter, then you've got to have a publishing schedule.

You have to promise your readers that your newsletter will go out once a month, or twice a month or three times a week—or whatever. Your newsletters can't go to Bermuda on vacation. They're doing all the grunt work for you. Our newsletter has gone out since 2002 and has done so week after week without any stoppage.

You want to stop? You are ill? Sorry mate, but that won't wash well with your readers. Imagine the TV station cancelling the news because some newsreader didn't turn up.

Nope, that doesn't work, and one of the big reasons for the lack of response is just the fact that you're a stranger to your readers. You can't show up whenever you feel like it and hope they'll respond. Response is directly related to frequency. Muck up on frequency and the rest of the four points don't even matter.

So there you have it:
1) Pure self-promotion is not going to work no matter how tepid.
2) Your tone of writing is critical. Use the phone. Get your tone.
3) Structure matters. If you can't get your head around structure, use customer stories. They work.
4) A call to action: This is where you self-promote. This is not the time or place to be half-hearted.
5) Frequency is the underlying glue. Without it your response is going to be highly unpredictable.

Response eh? Everyone wants response. But knowing how to define the response and then making sure you don't make these five big mistakes will definitely perk up your response in a hurry.