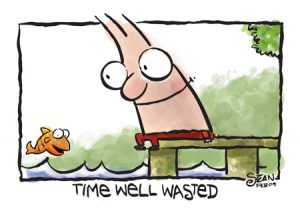 You've probably heard this story before about how I used to write articles.

As the story goes, it used to take me two days to write a single article. The process was so painful, that I'd write the next article after a month. And as you'd expect, two days of that month and all the months to follow, were miserable as well.

Then I started up a membership site called 5000bc

And 5000bc was bare as Mother Hubbard's cupboard, back in the year 2003. So I promised my members I'd write five articles a week. Of course, you can see the disaster unfolding, can't you? If I struggled to write an article a day, five article a week was going to send me right to the cuckoo club.

But something weird happened instead.

I found that the more I had to write, the faster I got. Every week, those five articles needed to be written (whether any one read them or not) and so I forced myself to write. And I did mention that it got faster, but it also got easier. Hah, now how on earth would that make sense? But it does, doesn't it?

If you run from your home to your supermarket, with all your sides jiggling, it's going to be huff and puff all the way. But do that every day, and then extend it to five times a week, and voilà, the jiggles go away. My jiggles were mostly in my brain. The more I wrote, the faster I became.

And then I went on vacation

And as you do on vacation, you take a break. You eat, drink and make merry. And return to what seems to be a writer's block. But of course, that makes sense too. If you run every day, then don't run for a month, you're bound to feel the resistance. So I decided to keep writing.

I didn't write about work on vacation. I wrote a diary instead. It was interesting to write the diary and most importantly, my writing never stopped.

But would you have to write every single day of your life just to avoid this silly blockage?

Good question. And it's one I asked myself as well. And the answer is, thankfully, no. I now go on vacation, and if I don't write a word, I can come back and get right into writing without missing a beat. So what's happened? How have things changed?

What's happened over the years, is that I've written so much that it's now no longer a skill

It's second nature. And just like you'd go to a foreign country, speak their language and come back to your own country and pick up speaking English once again. So it is with article writing. If you keep at it, you will get better and at some point it will become second nature.

But for now, you need to write

But write. If you don't write, resistance creeps in. You hear the jiggle.

You know you're doomed

Un-doom yourself. Just write.
Breaks are for the jiggly ones!