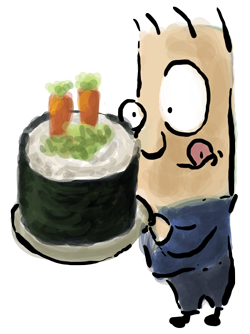 I raced madly, but I didn't care.

I raced madly, but I was too excited.

I raced madly, but I couldn't shake the depression.

So what's the difference between the first line and all the rest?

Well, yes the first line is shorter. But it also lacks emotion. And while facts give you um, the facts, they don't tell us how you feel. In any given situation, ten people getting the same bowl of soup will respond in ten incredibly different ways.

I saw the bowl of soup and my heart sank.

I saw the bowl of soup and it flooded me with happy childhood memories.

I saw the bowl of soup and I was surprised how hungry I felt.

I saw the bowl of soup, but a feeling of hesitancy crept into my being.

I saw the bowl of soup, and immediately felt overwhelmed.

What's the reading on her mother's face?

Is she about to going bananas in a second?

So let's jump in with a few examples…

Example 1: There she was, the girl I so cared for. And yet, there was a sense of disgust.

Example 2: There she was, the girl I so cared for, and my heart lit up like the fourth of July.

Example 3: There she was, the girl I so cared for. And then she was gone. I was frantic.

Example 1: Little did I know that I would be disgusted. After all this was the girl I cared for very deeply.

Example 2: I wasn't expecting that sudden burst of happiness on this gloomy day. But as I rounded the corner, there she was—the girl I cared for very deeply.

Example 3: There was nothing to suggest that I'd be frantic in a second. Because right there in front of me was the girl I cared for.

And so, the emotion sets the scene

Sometimes preceding the event. Sometimes after the event has occurred. The event itself is just an event. What makes it burst into flame is the emotion that surges through our system as a result of experiencing that event.

And then of course, we can choose to bring in the emotion earlier, or let in hang a bit behind and then whiplash the event with its suddenness.

But of course, you can overdo the emotions

Yes, the emotions provide the roller coaster that leads the reader through the article. And especially so, when you're telling a story. But you can't keep going on and on, line after line with emotions. Instead you bring in the emotion, and let the reader feel the happiness, sadness, disgust etc.

Sadness, depression etc. tends to linger a lot longer, and it's ok to keep it going for a little while. Happiness, fear— they're emotions that are fleeting. That speed through faster than a speeding bullet.

So yes, you drive the pace

And you drive it with the emotions.

Because ten people can drink soup.

And every one of those folks feel totally differently about the soup.

Until you add a dash of emotion. Maybe two dashes. You decide