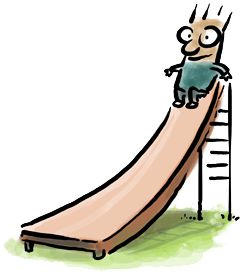 We've all seen that heart monitor in hospitals, haven't we?

It spikes up, down, then flat.

In stories, these ups, downs and flats seem to show up almost as part of the story. A story by its very nature seems to bob up and down.

Not so with articles.

In articles, it's easy to go from point to point without creating the ups and downs. It's easy to have so many facts that the entire article is filled with flats. So we have to take special care when writing articles. And we do this by inserting elements that instantly spike interest.

So which elements create spikes?

What also engages the readers a lot are stories/case-studies.

Plop in a story anywhere at any time, and you get attention. When I first began writing back in the year 2001 or so, I didn't realise the power of the story. I'd sit at my computer for two days in a row, trying to get the facts into my article. And somehow the article would be kinda boring. So I'd scrap it, start again, and try to stuff more facts in it.

And then one day it occurred to me what I was missing: It was the power of the story.

See that? I put a in a story. And you immediately locked in. Stories have that kind of pulling power. So do case-studies. If you talk about how Coca-Cola did this, or Harley Davidson did that, or how some scientist invented something, you get my attention.

Of course it has to be relevant to the article, but it gets that spike right up.

The third and last spike of all is the example part of your article.

Some articles are easy to understand. This one, for instance, doesn't need a ton of examples. But some concepts aren't quite that simple and examples spike interest right away. And they do so, because the reader is now directly applying the concepts to their business or life.

The example makes a big effort to explain the concept, so the reader is very focused on squeezing the maximum out of the example and reading intently. This intent reading is what causes the spike, of course.

Note: The blah, blah is not just blah, blah. It's represents the facts of the article.

Also note that you don't have to have the spikes in the exact same space all the time, but having a series of spikes keeps the reader's interest locked in.

The spikes make the reader edge forward. The blah, blah helps them to relax a bit.

Too many spikes and it's too hard to handle. Too few spikes and yup, it's borrrrrring!

But what if you don't have the opportunity to have all three elements?

Some articles don't have the space or even the need for all three spike elements (namely, story/case study, objection and example). What do you do, then? Well, every article has space for at least two elements. And even if you're stuck with the choice of just one, then that one needs to be “objections”.

So there you have it…

But don't disregard the flats. They're facts and matter a heck of a lot.

Together the spikes and flats create this movement in the article to keep the reader involved.

As long as it's going up, down and flat you know all is well.