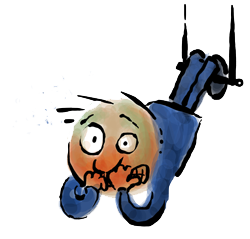 Imagine your roof is leaking.

Can you afford to ignore the drip?

Sure you can, because it's not flooding the carpet quite yet. But small as it is, that drip won't go away. As you sit down to do your work, that drip is audible, and you know you have to fix it. But since it's not a gusher yet, you've decided to postpone it. And that postponement, tiny as it is, is taking up a ton of energy.

The conversation with your brain is something like this

Did you fix the drip?
No, I'll get to it.
The drip, did you call the roof guy yet?
No, I'll just finish e-mail, okay?
The drip, it's not going away, you know.
I'm getting to it.

The first victim of procrastination is always energy

This is because the brain has its system of prioritisation. It knows pretty well when a task needs to be completed sooner than later. It knows that everyone and everything can wait—but that drip. Which is why you need to tackle the biggest issue as quickly as possible. When you get started on creating content for that big project; that book; that assignment for your course, your brain goes quieter.

Instead of this ping pong battle in your mind, you've gotten rid of the problem—or at least started on the solution. And that saves up a ton of wasted energy.

We don't think of procrastination as wasted energy, do we?

We just think we're putting off things until later. But the brain uses up its resources on a constant basis. And when it realises that you've not completed something important, it starts to nag, nag and nag. This inaudible nagging begins to make you fatigued, and tiredness leads to greater procrastination. Which means that leak is not fixed, but you're getting grumpier by the minute.

I know it's important to get started. I know I should be outlining and then beginning to write, but I will find something else to do. Email beckons; cartoons call out loudly. I'll even cook three or four yummy dishes before 10 am, but that book isn't going anywhere. Which means that by noon, I'm starting to get drained and nothing's achieved quite yet.

The second reason comes down to the “fuel” you're using. When you get started first thing in the morning, you're running on completely different fuel than at the end of the day. It's like you're burning liquid oxygen and liquid hydrogen and hurtling through space. As the day wears on, other drips start to get your attention.

Now your fuel has been downgraded to jet fuel. You soldier on, but soon you're running on diesel (which, by the way, is 40% more efficient than petrol). And finally, by the end—yup you're a petrol head.

The reason this “degradation” occurs is a simple concept called rest

Rest is what happens at night. If you haven't quaffed one too many Pinot Noirs the previous night, you should wake up quite rested. And you'll find that rocket fuel is at your beck and call. There's also the issue of fewer distractions. As the day unfurls, the distractions themselves become a gusher. Your poor brain is not just using crappy fuel, but it has to use that fuel for a bunch of unimportant activities.

And all the while the drip, drip, drip continues.

The third point is just satisfaction

My wife Renuka, she loves her list. And she's one of that kind of people who will keep lists for all sorts of things. Incredibly (well, at least to me) she will complete a task that wasn't originally on her list, and then cross off that task as done. You should see the smile on her face as those big slashes go across the jobs she's completed.

This feeling of satisfaction propels us forward. When a big task is achieved, we should be drained, but we find that we are strangely energised. We want to do more, and then go out and party (well, some of us do). So party or no party, it makes a ton of sense to take on the big task, doesn't it? Sure it does. But what if you're not a morning person?

Morning doesn't have to start at 4 am

Mine does, but your morning can start whenever you wake up rested. If you go to bed knowing the one big thing you have to complete, you should tackle that big assignment first thing in the morning. And the best way to tackle the assignment is to break it up into parts. Only the very brave or very foolish go headlong into a big assignment. The smarter you are, the more you'll realise that every assignment needs to be broken up into bits.

Let's say you're doing a course, like the headlines course

You have two parts to your assignment. You have to write out your assignment, but also have to do some reading of the rest of the group (so you can learn from their mistakes and successes). Try and do all of it at once, and the rest of your activities go into pause mode.

The way to tackle your assignment is to write out your headlines in the morning. Then armed with a substantial dose of satisfaction you go about the rest of your work or personal tasks. Later in the day, when you're running on diesel, go back and check the group's assignments. And you achieve the goal of learning at two levels: when you've done your headline writing and the analysis of your group.

Most of us write, edit, write, edit as if it were a single task. Instead, you need just to write until you're done. Start with that activity and then go do something else. Your brain is happy, and when you get back, it's so much easier to edit. When I create books or presentations, I have to do writing, layouts, cartoons, etc.

I'll take on the first task—outlining, before anything else. Then having done that task, I'll write much later. The edit comes a lot later, followed by layouts and cartoons.

Understanding how to manage your day is critical

– You don't want your brain to nag, do you? So get to that drip before it becomes a problem.
– To do the critical tasks, use rocket fuel. Petrol is rather inefficient.
– Satisfaction counts. It's like fuel you didn't know you had. Big tasks bring big satisfaction.

If you want to achieve more in life, it's not just about what you know, but how you tackle it.

Take on the big tasks, and watch productivity soar.
By the way, did you get to that drip, yet?

“I almost didn’t join 5000bc because I thought that I was too busy to participate and I wouldn’t be able to get a lot out of it.“

The time spent in 5000bc is worth so much more than my annual fee. The learning is very concentrated and targeted, so I’m able to apply what I’ve learned immediately in my business. I love the comprehensive vanishing reports, which could easily be sold as standalone products. There are tons of these in 5000bc and I love browsing through them to find answers to a current problem that I’m having.

5000bc members are very responsive and helpful. Sean is always around and answering questions. The level of expertise is very high amongst the members.

I would strongly recommend 5000bc to anyone interested in taking their online business to the next level.

The Brain Audit:  Why Customers Buy (And Why They Don't)
Testimonial Secrets: How to get meaningful testimonials, without needing to ‘bribe anyone’ for it.
Chaos Planning: Forget Business Planning and Goal Setting.

Announcing: A Hidden Reason Why One Book Made Over $600,000 in profits. Find out more here.
https://www.psychotactics.com/hidden-reason-one-book-profit/