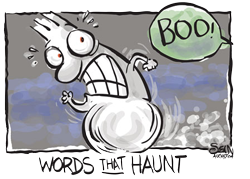 On a beautiful late spring afternoon, twenty-five years ago, two young men graduated from the same college. They were very much alike, these two young men. Both had been better than average students, both were personable, and both – as young college graduates are – were filled with ambitious dreams for the future.

Recently, these men returned to their college for their 25th reunion. They were still very much alike. Both were happily married. Both had three children.

And both, it turned out, had gone to work for the same Midwestern manufacturing company after graduation, and were still there.

But there was a difference. One of the men was manager of a small department of that company. The other was its president.

What you just read was the story used for a sales letter that is rumoured to have generated between $1 billion-$2 billion in revenues for the Wall Street Journal.

So what makes this letter so dramatic?

Well, it's clear isn't it? It's a story. And a story helps dramatise an event in a way that mere “sales” words may not. A sales letter may just spit out benefits, problems and solutions. But a story can bring in emotion and sequence in a way that gets your attention. So the question does pop up quickly: Should you use stories for all your sales letters?

And the answer is, it depends

A story works very well to get the reader's attention. But you need to be clear at the start what you're trying to achieve as well. And you use a story to:

Create a point of difference

Make the product/service easier to explain/retain

Let's start off with: create a point of difference

This also means that if you were simply browsing for marketing-type books in the store, you couldn't tell between one book or the other. This concept also applies to services, of course. You still have to stand out from your competition. This is where the story element helps tremendously. In a world of me-too, products and services, the story becomes the point of difference, because of the way it's being told.

So when we look at the story above about the two men who graduated from college, we see that the story causes us to react differently. Now we aren't looking at yet another financial newspaper. We're looking at the Wall Street Journal vs. other newspapers. But that's not the power of the story alone.

The story also gets and keeps your attention

The moment you have a story, you have a natural sense of a movie rolling out in a sort of sequence. Two men, did something, then they did something. Then they reached at some point in the road. That flow is part of almost every good story (yes, there are crappy stories too). And when you read the analogy of The Brain Audit, you realise that there's a story in it.

The bags come out on the conveyor belt and all six red bags show up—but one, just one is missing. You may call it an analogy, but it's a well-crafted story. You've been there at that airport. You know that there's that possibility of your bag going missing. It's not just a random analogy.

It's a story that you've thought about, even if you haven't experienced it personally. The flow of the story gets and keeps your attention. But there's the third element: creating emotional tugs

So how does the story create emotional tugs?

You've already worked this out yourself, haven't you? You can see how you feel aligned to the guy who's the president of the company. You feel his success. You feel the sense of “failure” at the second guy who just managed to become the manager.

Most stories have a core emotion factor. And just by telling the story, you stop the customer's brain from going down the logic route and right into the emotion and feeling. The emotion doesn't have to be positive. It can be negative like in The Brain Audit.

Losing the bag is not something you want to experience, but experience it you do, if only through the words in the story. Those emotions are very powerful because they creep in below the layer of logic; they force you to pay attention.

This of course, takes us to the fourth point: Make the product easier to explain

When you're selling something, you think you're holding the other person's attention with words like “service”, “better product” etc. If you watch closely the customer is trying to find some cafe to duck into while you're not looking.

But you rattle on. If on the other hand you start with a story, that very same customer stops and starts paying attention. But right after you're done with your story, that person is able to do something magical.

They're able to repeat the story to someone else almost without any dropout. So you can, after a single reading, tell someone else the “two men who graduated from college” story. Or you can tell them the “seven red bags” story.

So yes, the story becomes not just a point of difference, or gets attention, but it also makes the product a lot easier to explain—and retain. And yes, let's not forget that emotional tug.

But can you use stories in every product or service you sell?

Well, technically you can. Should you do it all the time, is a difficult question to answer. If your product is very me-too, it's almost imperative that you use a story or analogy to differentiate it from the rest. So when Steve Jobs first introduced the MacBook Air, his method of using the Manila envelope was critical because it's hard to wow people when one thin laptop looks just like another thin laptop.

It's the story/analogy that made the difference.

However, if you have a strong point of difference, that alone may do the job. For instance we have the Article Writing Course which is the “toughest writing course in the world”. Well, that doesn't need a story on the sales page. The difference is clear from the very start.

Start with the difference

If your product/service is very me-too, you're going to need a point of difference.

If you don't have a very clear point of difference, reach for the story.

It's the key to getting your product/service to becoming “president” instead of just another “manager”.

It's easier to convert a prospect into a client with story telling
The free headline report—on why headlines fail (and how to avoid that failure) will show you within 10 minutes of reading, how to do magic with your headlines. You can replicate or create great headlines, solely based on three simple steps.