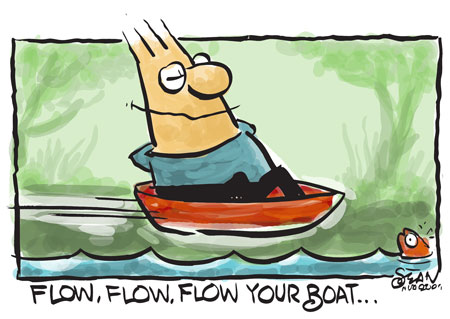 That may seem to you, to be the silliest headline ever. Why would you need to learn how to make mistakes? You're already a pro at making mistakes. You don't need a how-to article to tell you how to make mistakes, right? But bear with me as we explore why mistake making is a science.

At Psychotactics, we have a cartooning course

This course is designed to teach anyone (yes, anyone) to learn to draw superb cartoons. But guess what? Most of the folks who join the course can't really draw.

They probably haven't drawn much since sixth grade. And if there's one thing that's absolutely guaranteed, is that they're all going to make mistakes in the course.

Except they don't want to…

Which is normal. Who'd join a course to make mistakes? So the best thing is to let someone get it right. If they get too many things wrong right at the start, disillusionment sets in. And it's hard to keep going if you look like a goofball.

It's also hard for those supporting you to say “Wow, that looks great!” So the first goal is to get as much right as possible. But getting things right is a tedious process, because you're not experimenting enough. And the irony is once you start experimenting you make mistakes—tons of mistakes.

So we enter a phase of speed drawing. In a fixed time of say, 30 minutes, the participants are encouraged to draw as many characters as possible. And you only get a pat on the back from me, the teacher, if you make a ton of mistakes.

This method appears to be contrary to what your teacher told you in school, but it works. Suddenly the mistake-making brain goes to work, churning out 20 or 30 cartoons in less than 30 minutes.

It also relieves you of the need to be always right. And because everyone is making mistakes at the same time, the entire exercise turns out to be enormous fun, instead of a shameful activity.

The same principle is put into play when doing other courses

There's just no way to get it wrong. You can make all the mistakes you want, and not have the slightest fear or embarrassment. And this removal of fear is what allows you to learn faster.

In effect, talent is just the elimination of mistakes

We see talent as something inborn. But it's not inborn at all. Anyone can learn to write headlines or draw cartoons, or do anything to an exceptional degree—if they make enough mistakes and proceed to eliminate the mistakes.

But how can you eliminate mistakes if you don't make them in the first place? The only way out of this trap is to have a system to make mistakes.

Pilots aren't just taught to fly planes correctly. In training (and the training is ongoing) they are put into situations where things go horribly wrong.

They're then expected to work through those mistakes and work out a way to get the plane back on an even keel. Top sporting teams don't just work on their strategy of winning.

They also closely examine situations where things can go horribly wrong and how to pull out of it. And the reason is simple. Getting things right once is a fluke. You have to get things right consistently, and often there's no second chance. To be at this level of readiness, you have to be prepared to make mistakes while learning.

That's the key factor: While learning

This article isn't about you goofing up just for the sake of it. No one wants to be in a plane where the pilot is trying to get out of a tailspin. No one wants his or her favourite team to be trying out a new maneuver in the middle of the game.

Most of the major mistakes need to be made in practice, so that when it's show time you've eliminated as many glitches as possible.

And then go through a part where you get things wrong on purpose, relieving you of the tension and need to be right and perfect all the time.

Get things wrong. Make it a science project. See how many things you can get wrong on purpose. And then fix the glitches later.

It’s the fastest way to getting things right.

Did you find this article useful? You can leave your comments here. I would love to hear from you.

1) NEW! You already know that 80% of a sales letter depends on your headline.
So what's the remaining 20% that causes customers to buy? Find out more

5) Chaos Planning
Year after year you sit down and create a list of things you want to achieve. Then suddenly it's March, and you've not really moved ahead as you'd expected.
Learn Why Most Planning Fails: And The Critical Importance of Chaos in Planning.