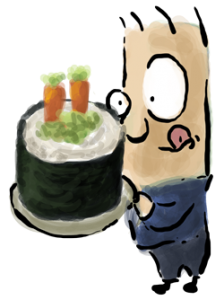 If you've ever watched the TV series, Star Trek, two characters come to mind right away.

Captain Kirk has a personality to take his space ship “where no man has ever gone before”. He's a bit out there. And Mr. Spock, he's the guy who's logical; who thinks before he leaps.

Writing—or creating content of any kind—requires us to be either Captain Kirk—or Mr. Spock.

Instead, we end up being Captain Spock.

When sitting down to write an article, we write, edit, write, edit. If called upon to write headlines, we expect to write and edit the headline or we're not satisfied. Even a massive project like creating a podcast, webinar or designing a website, brings our inner Captain Spock out with increasing frequency.

And yet, we can't play two characters at the same time.

We have to be Captain Kirk—or Mr. Spock

Our Captain Kirk mode allows us to brainstorm, to write and create freely. Our Mr. Spock mode comes later, a lot later, and nitpicks its way through the “chaos”. Both characters can't be on the chair at the same time. One has to be in command, while the other watches carefully—but doesn't interfere.

I didn't realise this important principle when creating content

I wish I could say I'm wiser and smarter now that I'm older, but I'm not. For instance, we embarked on a voyage of re-designing the Psychotactics site in the winter of 2015 (our winter is in August). And when I got on that spaceship, my goal should have been to go through the entire website in Captain Kirk mode.

Instead of wondering if things were right or wrong; whether a font should be grey or black, I should have ploughed ahead. Instead I put on the mantle of Captain Spock. I tried to be two people at the same time: creating pages, editing them, creating pages and yes, edit.

And I should know better

I've written hundreds of articles over the years. I know that you need to write the article without stopping to think too much. You spend your time outlining, then you go flat out and write an article, without stopping for a Facebook break.

When you're done, you put on your Mr. Spock hat and you peck and prod at the words; tidy up the sentences. You polish and shine your work until the deadline looms ahead.

It's important to separate the duties of Captain Kirk and Mr. Spock by as much as a day

Of course it's not always possible to write one day and edit 24 hours later, but it's probably a good idea. And there's a sound reasoning why—and you know it. Writing or creating content, is a tiring task.

It drains you of all your energy, even if you're proficient at it. You want to be super-fresh and rested when you're taking on such a monumental task. If you separate the tasks, you get both the characters to do their job exceedingly well.

You could be writing a headline of ten words, for instance. And you're in your Captain Kirk mode. When you're done with your headline, leave it alone. Go away, do something else. Let the ship fly on auto pilot for a while.

Then, as the Klingnon deadline approaches, put Mr. Spock in the driver's seat. Let him guide your ship. This space, this big chunk of space between creating and editing is extremely critical.

Yes, space. As in time. Give it time.

And let Captain Kirk be Captain Kirk.
Mr. Spock, he's fine as Mr. Spock.
Let one create; the other edit.

And let there be space.

P.S. That's how you “live well and prosper”.

“I almost didn’t join 5000bc because I thought that I was too busy to participate and I wouldn’t be able to get a lot out of it.“

The time spent in 5000bc is worth so much more than my annual fee. The learning is very concentrated and targeted, so I’m able to apply what I’ve learned immediately in my business. I love the comprehensive vanishing reports, which could easily be sold as standalone products. There are tons of these in 5000bc and I love browsing through them to find answers to a current problem that I’m having.

5000bc members are very responsive and helpful. Sean is always around and answering questions. The level of expertise is very high amongst the members.

I would strongly recommend 5000bc to anyone interested in taking their online business to the next level.

The Brain Audit:  Why Customers Buy (And Why They Don't)
Testimonial Secrets: How to get meaningful testimonials, without needing to ‘bribe anyone’ for it.
Chaos Planning: Forget Business Planning and Goal Setting.