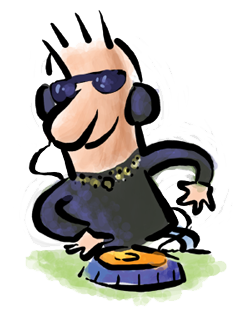 Have you ever driven a car really fast? At some point it seems like the car is standing still. You're doing 100mph, but it sure feels like you're not really moving. You get this feeling on a plane as well. You're hurtling at 500mph and you feel like it's a terribly long flight and you're bored, frustrated and there seems to be no destination in sight.

This is the curse of super-momentum

I'll have participants on a course like cartooning for instance. Some participants do just one or two cartoons a day. Some do sixteen a day. So who feels the most stuck?

Now I can turn out three or more articles in a day. But I often feel like I'm doing nothing. I'll get up, write two or three articles. Read through about 50 posts, go for a walk and I feel I've done NOTHING! I feel the same with my watercolours. In 2010, you couldn't talk to me when I was doing a wash of watercolour. Now I can do three washes while having breakfast. And I think I've done nothing.

Super-momentum is the reverse of lack of momentum

Lack of momentum makes you feel like you're doing nothing. And you usually are.

But super-momentum reeks of the same lack of progress. It's time to recognise that your brain is playing tricks on you. That indeed you're in a plane hurtling ahead at 500mph.

That you are moving ahead incredibly quickly.

Even if you can't feel it.