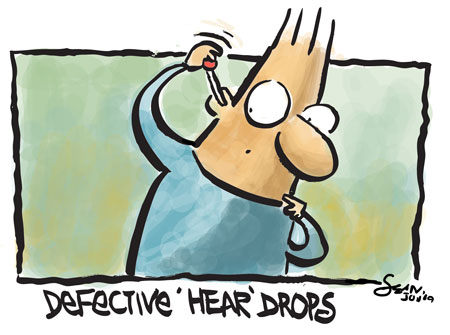 If someone says pass the ‘cheese', what are they saying?
They're saying: Pass the cheese, right? Except that's not the way some kids hear it.

They hear pass the grease. Or pass the peas. Or pass the fees.
And in many cases these kids don't even hear a word in English. Or Japanese. Or French. All they hear is a mushy sound.

And since all early development is sound based, these kids get off to a lousy start.
While all the kids around them are called smart, and intelligent, these kids are called dumb and slow. And amazingly, it has little to do with brain processing and a heck of a lot to do with hearing.

In his studies, eminent scientist Michael Merzenich proved time and time again, that if you could improve the sound for these kids, you could see a dramatic change in their learning.

And it all starts with the critical period of learning
This is when the brain is setting up basic processing machinery. And it doesn’t take learning per se, to drive the initial differentiation of the machinery of the brain.

All it takes, for example in the sound domain, is exposure to sound. And the brain is at the mercy of the sound environment. So for example you could rear an animal in an environment in which there is meaningless sound. And what you find is that the animal’s brain sets up the sound as kinda important. The sound doesn’t have to be valuable to the animal. And the brain quickly sets up a processor that’s specialised to listen in to those sounds.

But what about normal kids? What's wrong with their hearing?
There's a little girl who lives not far away from my house. One day, when I was visiting, she said: “I have bad handwriting.”

I was stunned. Kids barely learn to write at the age of four and five. How come a four year old knew that her handwriting was bad?
And how could she compare good with bad when she's barely able to work out the letters herself?

The answer lies in the hearing, doesn't it?
Her mother has been telling her that she's got bad handwriting.

The problem doesn’t stop at kids
Even though adult brains are extremely plastic and can learn quite easily, what I’ve found is that when learning a new skill, adult brains go through a ‘critical period’. In this critical period their brain either hears sounds that create a language processor for learning that particular skill, or it’s confused with the random or negative sounds so that the language processor simply recognises noise.

What this boils down to is the obvious conclusion
Talent is but a language. Your brain is a language processing unit. If the brain hears noise, or has obstructions that prevent it from hearing the right words or structure, it will not be able to develop that talent.

Want to get more goodies?
Next Step?: Get Updates via RSS | Get Updates via Email (Fill in your details in the top-right hand form)
Don’t forget: Look at the Psychotactics Sequence of Marketing Products and Services.