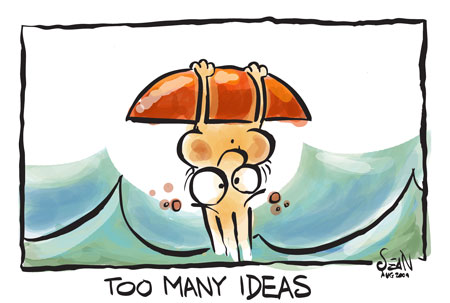 In the year 2003, I got on a cruise ship from New Zealand to Australia.
And those cruise ships are so big, that you'd never believe you'd get seasick on one of them. And yet it's quite easy to get seasick when the sea is churning and monstrous waves keeping battering the ship time and time again.

Which is a lot like what happens when the reader of your article has to deal with waves of ideas. Even if you've got a robust article with lots of solid information, it's easy to let the waves of ideas make the reader feel a bit ‘seasick'.

So what are waves of ideas?
Waves of ideas are simply when you expect the reader to deal with too many ideas too quickly. When you're writing an article, you often get loads of ideas. So you put some of the ideas down at first. And then as more ideas stream in, you add the new ideas to your article.

But the reader is barely working out the first idea—when the next appears. And the second idea hasn't been fully understood—and then yet another idea pops up in the article.

So what does the reader do when faced with these waves of ideas?
Readers tend to do one of two things:
1) They scan.
2) They leave.

When faced with too many ideas, some readers will just skip over the words; then the sentence; and sometimes the whole paragraph. When our brains don't understand something, we simply bypass the information because our brains can't make sense of it. So rather than spend valuable time and resources trying to find out the details, the brain does a skip.

And this skipping is dangerous because you may have written something important in that paragraph, and because the reader can't work it out, they miss that important point. And this missing of important points leaves gaps in the reader's understanding. So the reader may struggle through the rest of the article. Or they may not struggle at all.

They may just leave.
When faced with something that's complicated, it's easy to get distracted and leave. The brain doesn't like to deal with information that's tedious. Or complex. It finds too many ideas too difficult to process, even if those ideas are indeed simple ideas. This causes the brain to tell you that you're better off reading something easier. Something that's not causing the brain to feel so queasy.

And to explore this concept of queasiness fully, let's take an example:
If I say: Imagine you're having a cappuccino, but wait don't mix it with a flat white….

As soon as I made that statement above, you may have been confused. You see a ‘flat white' is a common coffee here in New Zealand, but may not be quite as common in the rest of the world. So when I put in something new, you are instantly confused. This is because you may not know that flat white is a type of coffee. And that's not the only reason why you were confused.

You see, your brain was busy conjuring up a cappuccino and then suddenly it has to conjure up a flat white.
It's very hard for the brain to make these sudden jumps—and inevitably there's a feeling of nauseousness.

So how do you make sure that you aren't creating this nauseous feeling in your articles?
Make sure you know what you want to communicate. And then stick to one idea. In this article I wanted to communicate the concept of feeling nauseous. And so I chose the concept of a cruise ship being battered by waves. But of course there are lots of situations where you feel queasy.

There are lots of ways to feel queasy, but I chose one way to demonstrate the fact: I chose the cruise ship. And the same advice applies to you. You're going to have many ways to represent an idea. But choose just one way. Choose one example to explain your concept, and make sure that example doesn't require the reader to think too much all at once.

So each point is clearly and simply presented before moving to the next. And next. And this creates a nice flow. And that's what you're looking to achieve in your article.

Or in other words: Don't rock the boat!

Want to get more goodies?
Next Step: More Goodies: Find the entire series on article-writing (articles not tips) in text and audio with cartoons!
Don’t forget: To share the article via twitter, facebook, email, blog or your newsletter